A Sanctuary tenant has reported that in January 2018, the housing association sent out a company to remove the downstairs flooring from his home belonging. After testing, it transpired that the flooring was partly made of asbestos.

Asbestos is a product containing microscopic fibres which can damage the lungs of anyone breathing it in. It thickens the structures of the lungs and eventually causes cancer. To remove Asbestos materials from a home, very specific precautions should have been taken. They weren’t. Instead, the tenant’s home including much of his furniture, clothing, and personal belongings were contaminated by the fine dust that resulted from the work.

“Me, my 15 year old son and our pets were all exposed to Asbestos fibres.”

In fact, the tenant notes that the sources of Asbestos were left exposed, and the removed laminate flooring was left outside his property for two years before Sanctuary finally removed it (coincidentally on the same day the local Environmental Health Inspector visited) possibly exposing members of the public to the dangerous contaminant during this period.

The tenant, who is disabled, is now prohibited from entering his own home due to an emergency prohibition notice, until further testing is undertaken and a solution found and put into place.

Quite apart from the inappropriate handling of Asbestos materials, getting Sanctuary to acknowledge the risk and start taking steps to address it has been a two-year battle causing untold distress to the tenant. He has lost treasured possessions due to the contamination. And because Asbestos is slow-acting, he now lives with the knowledge that he, his 15 year old son and his pets have been exposed to toxic materials which might one day start to impact on their health, but without knowing when illness could strike.

The presence of the Asbestos-based flooring in Sanctuary homes also appears to be a wider issue. At least one of the tenant’s neighbours has a Sanctuary home of identical construction, and others on the estate are the same.This case is just one of a number of serious Sanctuary disrepair cases that have been reported to SHAC and which have dragged on for years without satisfactory resolution. They cause unquantifiable physical, psychological and financial damage to those condemned to suffer them. 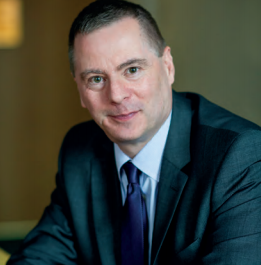 New chief executive Craig Moule received a basic salary of £255k from Sanctuary in 2019. The executive declined a meeting with tenant representatives.

Sanctuary is a large and wealthy housing association. In 2019 it “recorded a pre-tax surplus rise from £70.8m to £76.9m in the year, with turnover up from £708m to £735m” (Social Housing magazine). It paid previous chief executive David Bennett a basic salary of £306,000 with other benefits added on, and the new chief executive Craig Moule took home £255,000 in 2019 according to the Sanctuary accounts. While the number of serious disrepair cases may affect just a few of the group’s almost 84,000 owned or managed homes, there is no excuse for such cases occurring or taking so long to resolve. The impact on the individuals concerned is devastating.

The reality of the lived experience for some Sanctuary residents falls far short of the organisation’s promises to “make it easy for you to contact us if you have a problem” and “keep you informed regularly of how we are dealing with your query or complaint” (Sanctuary Annual Report to Residents 2019). Not surprisingly, resident satisfaction levels are in decline from a high of 96% in 2015 to 93% in 2019.

The Sanctuary executive have consistently shied away from meeting directly with the representatives of tenants who are experiencing apparently intractable problems. A recent request by tenant representatives received the following contradictory response:

“Sanctuary is completely committed to serving its tenants and residents, and ensuring they receive a good quality service … we are determined to resolve issues when there are cases where we have fallen short”

But the executive nonetheless declined the request.

Our homes should not make us sick. Housing associations have no excuse for exposing tenants or the public to harmful materials, and must act swiftly and appropriately if there is even a slight risk to health and safety. Sanctuary must now review the construction materials in all its properties, inform the tenants and residents of potential exposure to Asbestos, and take immediate and appropriate steps to remove it safely and protect its tenants long term health.